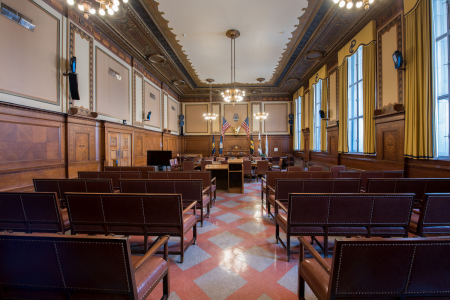 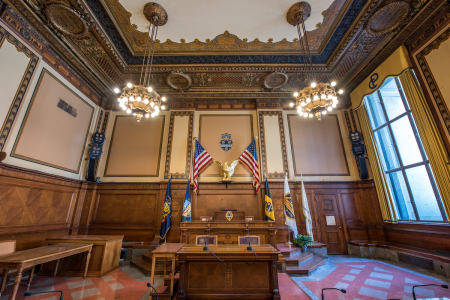 Henry Hornbostel and Edward Lee designed this Beaux Arts public building with elements of the City Beautiful Movement (built 1915-1917). He also designed most of the furniture, much of which is still in use today. A prolific architect with more than 225 buildings to his name, Hornbostel was also the architect of Soldiers and Sailors Memorial Hall and the Carnegie Institute of Technology (now CMU).

After visiting the lobby of the Pittsburgh City-County Building, visitors will experience the Beaux Arts styled Chambers. Take note of the plastered ceilings that list the municipalities of Pittsburgh. See original painted canvas panels. In addition, visitors can explore the Hall of Mayors, Office of the Mayor, and the rarely opened Pittsburgh Vault, containing the city’s archives.

The City of Pittsburgh is proud to open the doors of the historic City-County Building to the public, allowing a unique behind the scenes look at the seat of Pittsburgh's government – including the Mayor’s Office and City Council.

This magnificent space was considered to be temporary! Now, 100 years later we happily open the doors to what we foresee as our permanent home, to the public.

Be sure to visit the the Mayor’s Office and the City vault while you are here!