The City of Pittsburgh has a registry of historic landmarks that include buildings, monuments, and sites that tell stories so important to our identity that they are celebrated–and protected–by the City itself.  While the list is ever-expanding, today only one site, the Peterson House in Lawrenceville, is associated with an openly queer individual in Pittsburgh’s history.  While Peterson’s story is certainly an important part of our history, Pittsburgh has a number of sites worthy of registry consideration that would help to more fully capture, and convey, our LGBTQ+ history.

Some of those spaces worthy of recognition are directly affiliated with members of the LGBTQ+ community who substantially impacted history.  A number of sites in the East End associated with Willa Cather and her work are surely worthy of consideration, as would be the noted childhood home of Gertrude Stein on the North Side.  By the same measure, Andy Warhol’s childhood home, a modest house in South Oakland, would also create an amazingly personal and intimate connection to one of Pittsburgh’s most famous denizens who quite literally changed how the world views and understands art.

The sites affiliated with LGBTQ+ Pittsburghers who stayed much closer to home and had a more local impact are equally deserving of consideration.  The home of–or another place connected to–Randy Forrester (Pittsburgh’s first out political candidate) and his long-time partner Jim Huggins, who jointly founded the Persad Center in 1972 come to mind.  As do places of those who shattered barriers for our community, running for, or coming out in, political office.  Pittsburgh is the home to the Commonwealth’s first openly-gay state senator and a place connected to our former City Council President would also certainly fit the bill.

Places associated with individuals are, like the Peterson House, wonderful threads to honor and elevate, but we should absolutely give consideration to the sites that are associated with our larger community so that the rich and diverse history of the LGBTQ+ tapestry can fully come into focus.  Gathering places like Lucky’s in the Strip, the former Pegasus downtown, the former Pittsburgh Eagle, and the former Shawn’s in Uptown serve equally-important roles in the fabric of our history and are all personal favorites because their significance often belies how they visual present themselves from the public’s view.  Not all landmarks are historic because they’re pretty.  And the relatively-marginalized location of these places and overall visual appearance is in and, of itself, an important reminder of the very long narrative of marginalization interwoven into the history of our community.

It’s also important to remember that historic sites don’t necessarily have to be directly affiliated with the built environment.  The first LGBTQ+ march for civil rights in Pittsburgh occurred in 1973 and was hailed as “Pittsburgh’s first gay public demonstration” by the Pittsburgh Post-Gazette.  The route of the march stretched from Oakland to Downtown and purposefully wound through Soho, an underserved neighborhood important to gay Pittsburgh history that no longer exits, save one (gorgeous) public bath house dating to the early 20th century.  This moment in our history doesn’t correlate directly with a specific building, per se, but the opportunity exists to look at that route and install a memorial walk (and/or historic marker) in the sidewalk that marks the bravery of those Pittsburghers that took the first steps to creating a better city for us all.

The good news in all of this is, with only one historical site designated, there are plenty of opportunities.  And a bevy of members within our community are collecting stories, oral histories, artifacts, and other important elements that capture our important narratives and help focus on sites that are worthy of designation and official recognition.  We should look to these collections to help further identify sites worthy of recognition and most importantly of all, we need to ensure that these narratives are inclusive of different experiences and perspectives within the LGBTQ+ community. 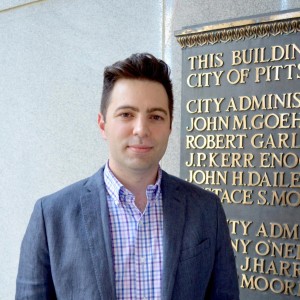 Matthew Falcone serves as the president of Preservation Pittsburgh, a community-based non-profit dedicated to help communities preserve and celebrate their heritage. He also serves on the City of Pittsburgh’s Historic Review Commission and as Rodef Shalom Congregation’s president. He holds degrees in Integrative Arts and History of Art from the Pennsylvania State University and the University of York (U.K.) respectively. As an art historian and experienced stained-glass conservator, Matthew has a strong affinity for Pittsburgh’s rich history of publicly-accessible art. Matthew lives with his husband and two daughters in Pittsburgh’s historic (and locally designated) Deutschtown neighborhood.